VIEW CART
Dennerle All in one Skip to content

Welcome to our store

Dennerle All in one

Dennerle All in one

Hurry Up! Only 3 items left

THE AQUARIUM EASY-CARE FOR FISH, SHRIMP, PLANTS, FILTER AND WATER.

ALL IN ONE! ELIXIER

Ideal during the start-up phase of every aquarium

Each aquarium is a complex biological system, whose elements depend and interact on each other. Fish, plants, water, lighting, aquarium bed – everything interacts. Therefore, you must always consider an aquarium as a whole complex in order to understand it.The goal of every aquarist is to create a natural balance.An Aquarium in balance is easy  to handle and stabilises itself.  The fish show vibrant colours and are active, the plants are lush and vigorous, the water looks clear and healthy. To achieve this state, a gapless supply of vital elements is required. Scientists know: if there is even only one single nutrient missing, plants grow poorly. And poorly growing plants immediately promote algae growth.

Against this background and with more than 50 years of know-how in the cultivation of aquarium plants as well as a deep understanding of the biological relationships, Dennerle invented a new and complete care elixier: All in One! Elixier. It supplies the aquarium with 12 carefully coordinated active components: carbon, iron, plant nutrients, nutrient stabiliser, amino acid, vitamins, trace elements, herbal extracts, aloe vera, dexpanthenol, iodine, filter-booster.

Each active complex supports the natural metabolic processes and cycles in its own way, directly and indirectly. Synergistic effects help the ecosystem aquarium to help itself. Based on a regular use, the positive effects are visible within a few weeks. With All in One! Elixier the care of modern aquaria becomes much easier. Thus, the little piece of nature in one‘s four walls can be enjoyed even more relaxedly. The aquarium in balance with healthy fish and shrimp, magnificent plants and clear water. 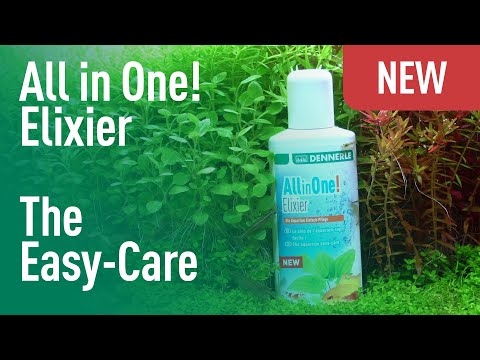 You have successfully installed the application in your theme