Welcome to our store

Thanks to algae, planet Earth has an atmosphere.

The subject of algae growth might be the most frequently discussed topic in the aquarium hobby.

.. and there's one thing for sure: algae and aquarium keepers will never be true friends. For many, our beautiful hobby can meet its untimely end before it has even taken off. In many cases, the culprit is an excess of algae that does not seem to let up. The bad news is: There is not one single aquarium that runs completely without algae! Algae are natural inhabitants of all the different water bodies of the Earth. Algae come into our aquaria and into our homes quite naturally. Many algae reproduce through spores that may be introduced via the tap water or even through the air. 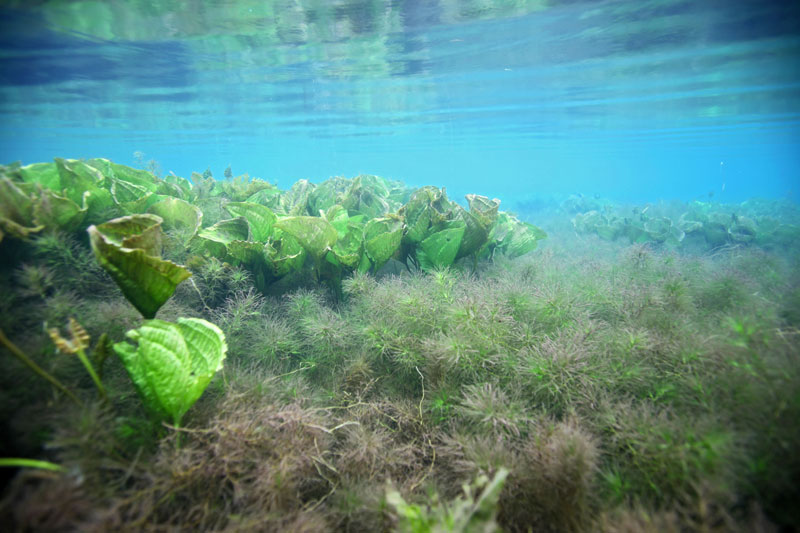 Algae play an important role in the aquarium, they stabilize the system and - just like higher plants - they keep the biological cycles running. And yet, algae carpets are not something the average aquarium keeper or aquascaper wants to see in their beautiful underwater landscapes.

Algae were the first organisms on our planet to produce energy from sunlight.

These so-called blue-green algae were the reason our oxygen-rich atmosphere formed. The algae evolved, and now we have hundreds of thousands of different algae species.

Today they are responsible for 40% of the oxygen produced on our planet. Without algae, higher plants as we know them today, could not have developed. The green leaf color (due to chlorophyll)can be traced back to blue-green algae migrating into the tissue of veryearly plants.

Algae provide nutrients as an important food source for different animals.Additionally, they produce oxygen when they photosynthesize. In our aquaria, algae are direct competitors of the aquatic plants we cultivate, a competition that can also be observed in nature.

During our Plantahunter tours we have seen and documented this phenomenon time and again: in nutrient-rich water bodies low in oxygen, as well as  in water with high  carbon dioxide where true aquatic plants and marsh plants are at their optimum.

In areas with high oxygen content, trace elements are often oxidized and precipitate  and carbon dioxide is low. In these conditions, algae do much better than higher plants.

"Algae are ugly" — this is a statement you will often hear from aquarium hobbyists. We have realized through our Plantahunter tours, that this statement is not always true.

The world of stoneworts is multifaceted and very interesting. These algae look more like a flowering plant, and you can easily mistake them for the more well known hornwort Ceratophyllum. It's no surprise that some botanists hypothesize that stoneworts are the direct ancestors of our modern terrestrial plants.

The genus Chara,  the botanical name for stoneworts, can be found on every continent. There are several different species in Europe, even in Germany.

There is one thing they all have in common: they like water with low levels of nutrients and prefer high lime content. As many water bodies are more and more polluted with organic waste, most Chara species are found on the Red List of Endangered Species. 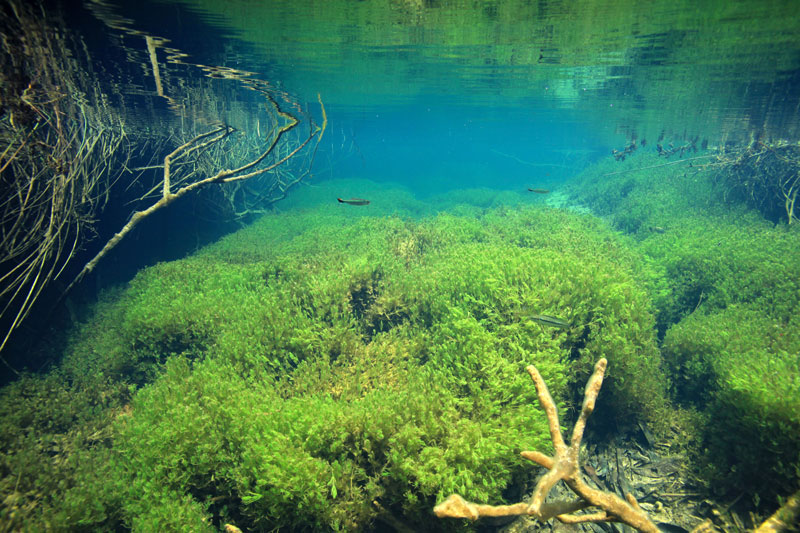 Wherever you see stoneworts, you may safely assume that the environment is still intact. During our Plantahunter tour in Brazil, we found this gracefully beautiful algae for the first time, and only one year later, we encountered it again on the island of Sulawesi. The multitude of Chara forms in the Malili Lake System was absolutely stunning and fascinated us deeply. 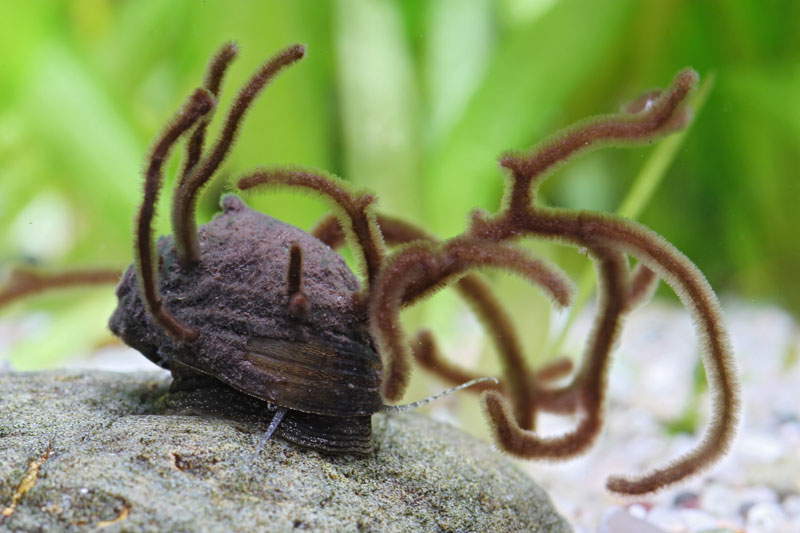 Macroalgae and microalgae can be found everywhere on our planet. Most of the species are marine algae and freshwater algae. There are also specialists such as air algae, soil algae, and even snow algae.

The variety of algae species is unknown. According to different estimates by authors, the number ranges from 70,000 to a million species. Within groups of algae there is an incredible spectrum of different genera and species. In our aquariums you can describe four important groups of algae that everyone has probably come across in their glassboxes. 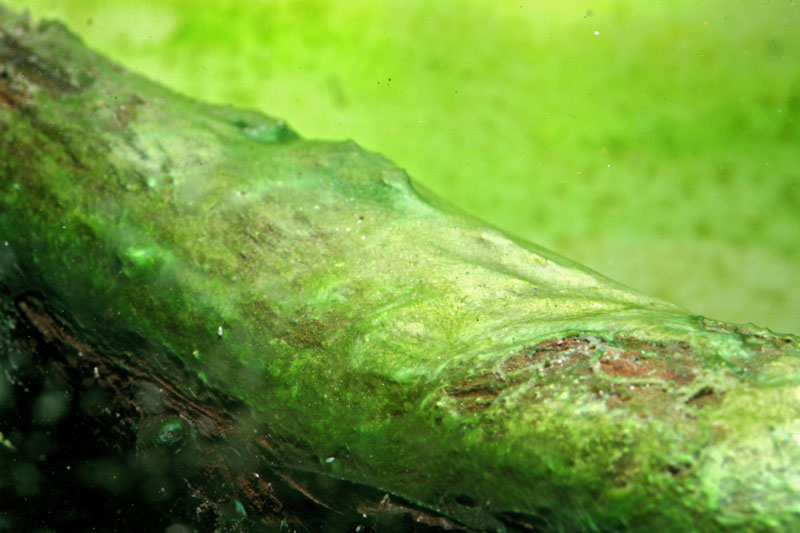 Blue-green algae, aka BGA or Cyanobacteria, are often found in aquaria. They are the most ancient algae in fact, they aren‘t algae at all. They are classifiedas bacteria, given the fact that they lack a true cell nucleus. BGA grow fast, forming a blue-green layer on the substrate, rocks and driftwood.

In the case of a BGA infestation, a 5-6 day blackout helps. No light may enter the aquarium during this time: Use a piece of cloth or cardboard to shade it off completely. After that, change 50% of the water three days in a row. Blue-green algae can produce poisons, which make these large water changes so important! 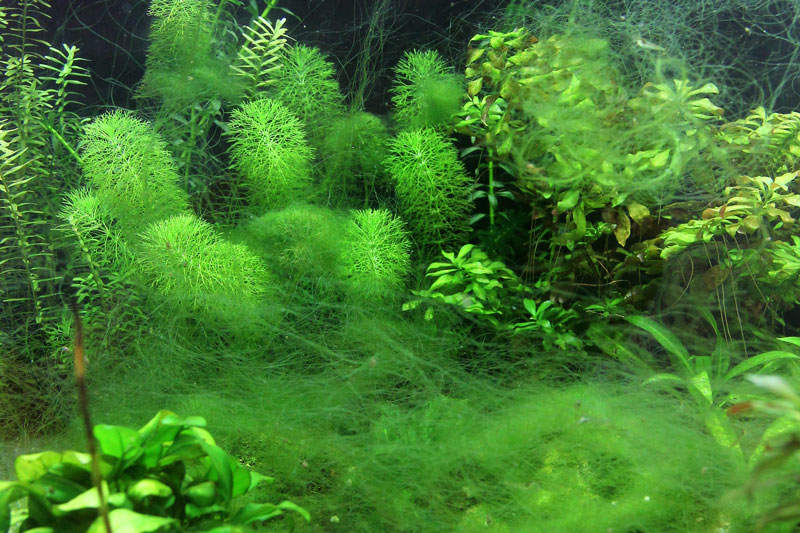 Green algae are quite comparable to higher plants when you look at their metabolism and structure. Small green spots on the glass and leaves of slow-growing plants like Anubias are almost certainly green algae. Some take the form of long filamentous structures or algae that grow in cushions. 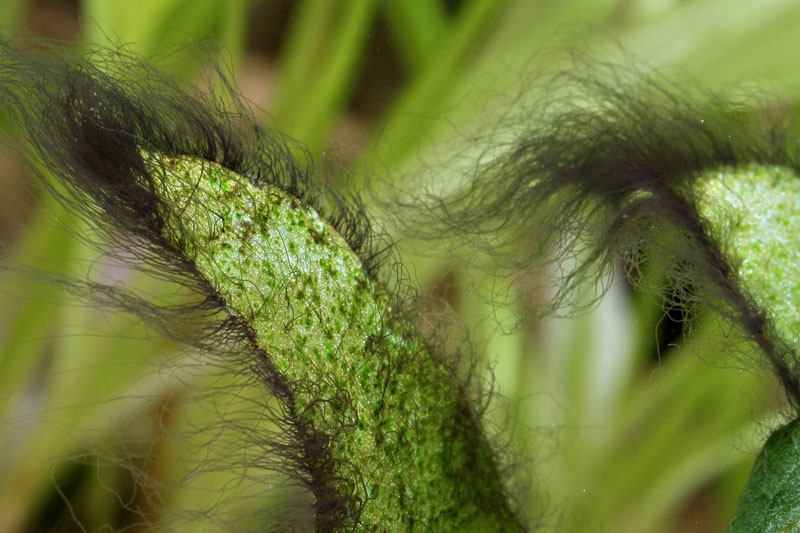 There are two highly unpopular kinds of red algae. Both respond very well to the anti-algal measures we provide in the text. These are beard algae and staghorn algae, which both prefer an environment with little CO2. They prefer growing in places with a stronger current.

If more Co2 is present in the water, red algae will incorporate less lime into their cellular structures, and algae eaters will more easily consume them. 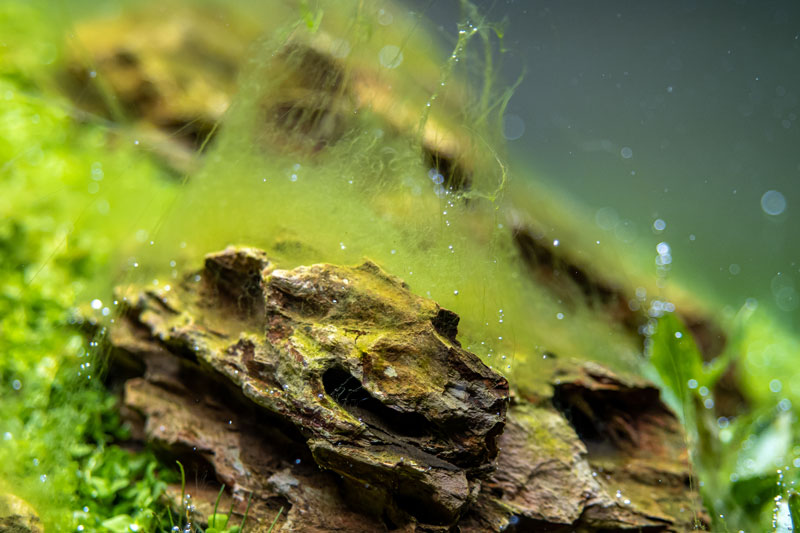 Diatoms form a brown layer on rocks, driftwood and other decorative materials. Fast-growing plants and the rasping mouths of snails or Otocinclus catfish reduce diatoms efficiently. Usually these algae appear during the cycling phase of a tank and disappear all by themselves after a few weeks. 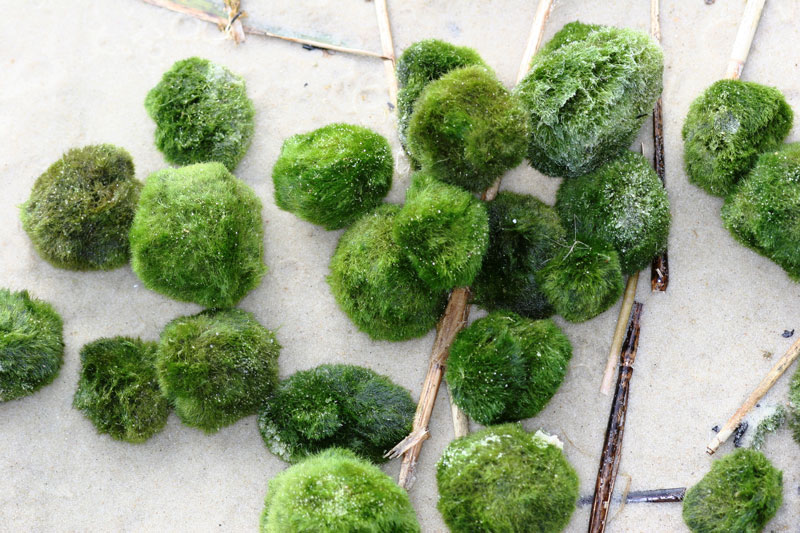 The answer is relatively easy if you know how things work in nature. A low level of organic pollution, well-growing, healthy plants,and an appropriate quantity of fish (neither too high or low). These condtions make life easier for the plants and more difficult for the algae. The aquarium keeper has a vital task - fertilization. Creating strong competition for the algae by fostering healthy, well-growing plants is really the best remedy and the easiest way to fight algae.

A CO2 injection system provide the plants with everything they need to grow and to consume nutrients that would otherwise feed the algae. In our experience, an aquarium with a good carbon supply runs far more stable than an aquarium without the addition of CO2.

However, the supply of the other main nutrients and trace elements is also crucial if you want well-growing plants. Provide these witheither a nutritious undergravel medium, a liquid fertilizer, or both. Of course, the lighting, the plants, and the animals all need to be in sync with the fertilizer regime. Intense light, slow-growing plants, and lots of nutrients are a combination that give the algae a huge advantage. Consequently, that could spread explosively. A frequent water change of around 30% every week, is also a good way to keep the algae in check, as you remove pollutants and add fresh nutrients for the plants. 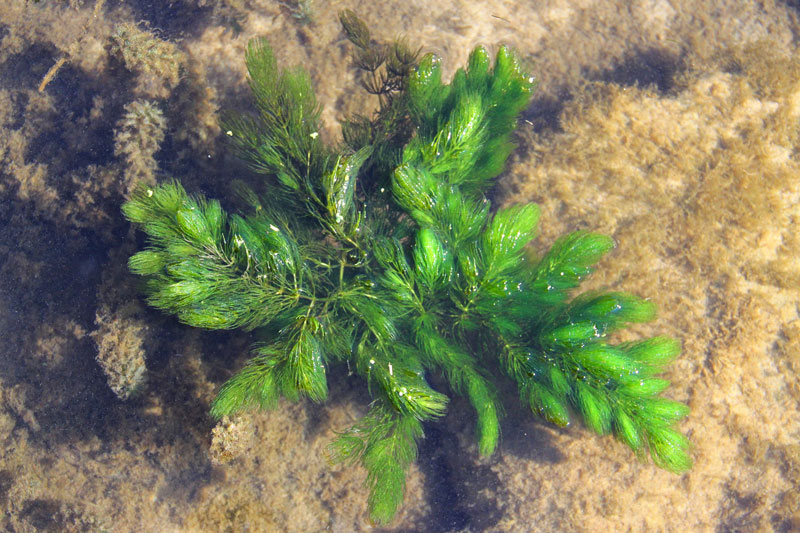 The best algae prevention is a relatively low stock of fish

Low stock of fish means that less food is added to the biological system. The kind of food you choose for the animals you keep in your aquarium can also have a significant effect on the growth of algae. As tests with Dennerle food range have shown, high-quality natural foods can help reduce the algae population.

The intensity of the light and the duration of your photoperiod, also have a great influence on plant growth. The lights should not be on for over 10 hours. With longer photoperiods, the photosynthesizing systems of the plants may go inactive or even suffer damage. Switching the lights off for 3-4 hours around noon has also proven quite effective. The plants can use this pause to regenerate their photosynthesizing system.

When we set up a new aquarium, we have a great choice: there are over 200 aquarium plant species of all forms and many colors that grow in the Dennerle greenhouses. Two of them even have great potential as algae killers: 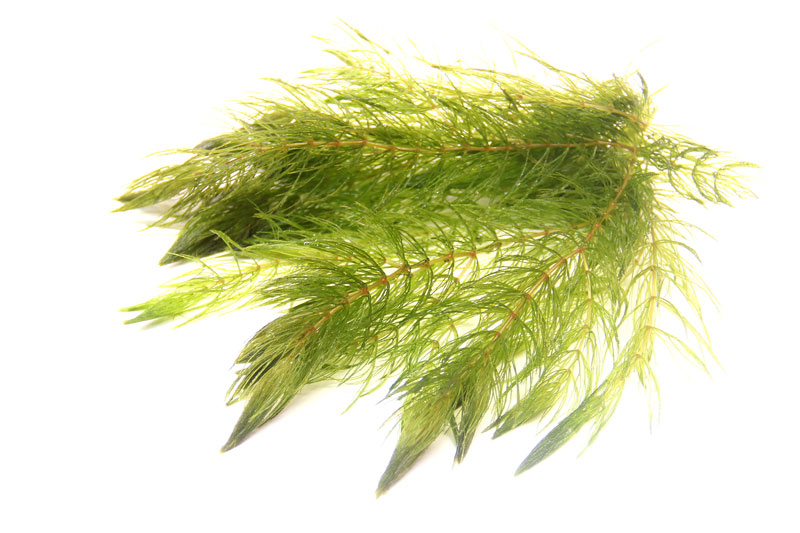 We never set up any tank without hornwort (Ceratophyllum demersum). Hornwort, whose name derives from the hard, horn-like structure of its leaves, can be kept as a floating plant and will start consuming surplus nutrients immediately. The other plants are able to take root without having to compete against the algae. Later on,they'll take over and contribute to biological balance in the aquarium. When the hornwort has done its job, you simply remove it from the tank, and place it in a large glass vase - a beautiful decoration for every room 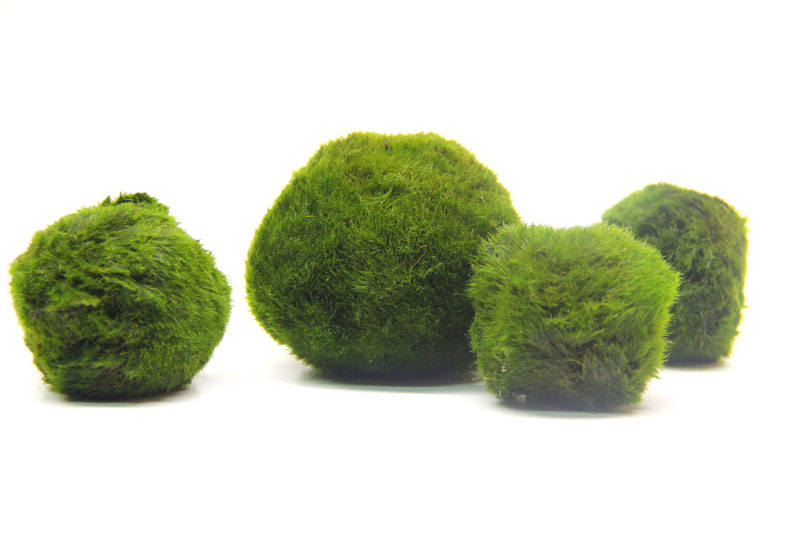 They are also called “moss balls“. While the nickname, "algae balls" is not as appealing, it technically is more accurate given that these hollow fuzzy balls are in fact, formed by green algae of the genus Aegagropila (Aegagrophila linnaei). Located in their core, are microorganisms that break down nitrates, thus taking away nutrients from the algae.

You should avoid anti-algae products. They do not combat the root cause. Instead, they treat the effects and usually damage the aquatic plants. It is better to use algae-eating fish, shrimps, and snails. 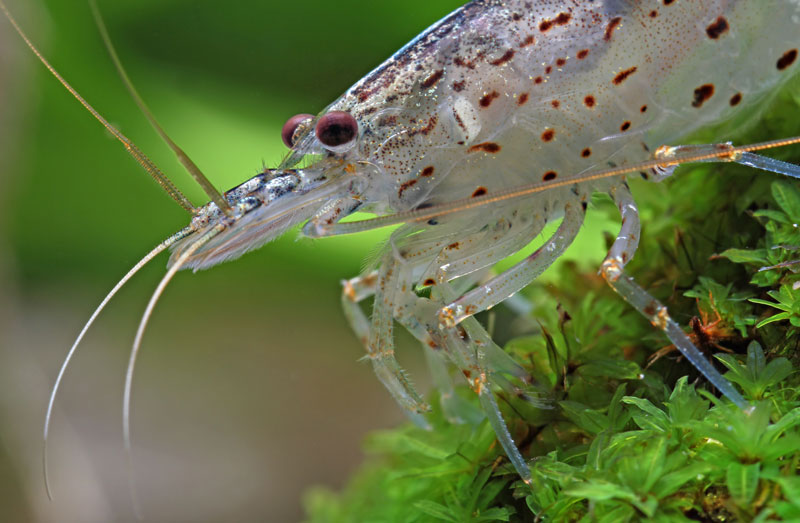 One of the best algae-eaters is the Amano shrimp (Caridina multidentata). Even a small group works wonders. They can therefore be found in almost every aquascaping aquarium. The substrate, stones, and roots are tirelessly grazed for algae and other food. 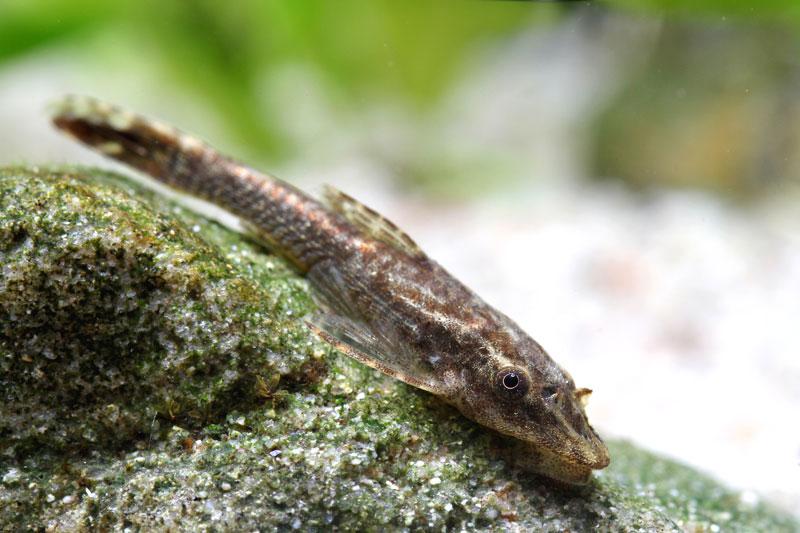 Otocinclus catfish are highly recommended. This small, peace-loving fish should always be kept in a group of at least 5-10 animals. It tirelessly "processes" algae deposits on leaves, wood, stones, as well as the glass. 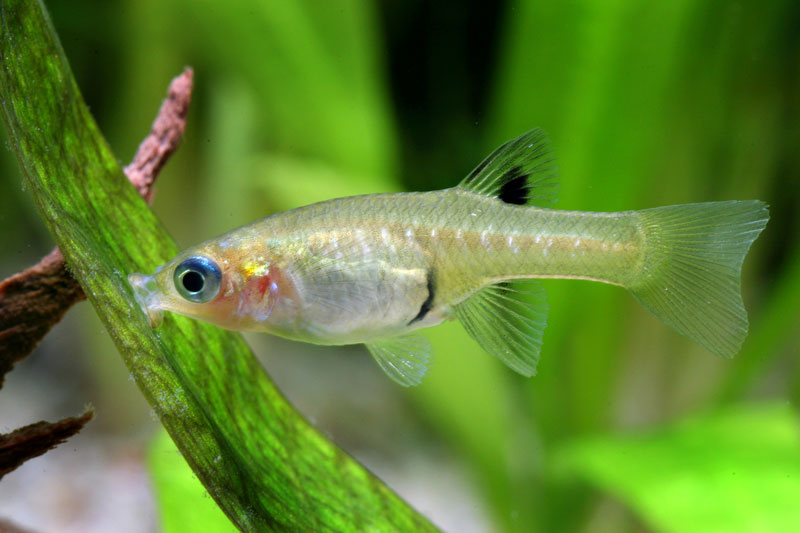 Most livebearers, such as guppies, black mollys, and platys also like to eat algae. They particularly like to graze on younger algae layers.

Snails such as the zebra nerite snail and the horned nerite Chlithon, are perfect glass cleaners thanks to their rasping technique. Stones and roots are also popular places for them to graze.

Copyright: https://dennerleplants.com/en/learn/algae-guide/, the article has been originally published on the Dennerle Plants homepage.

You have successfully installed the application in your theme